Furthermore a short description is given of the constructions in OCL.

Associations are the means for establishing relationships among classes.

They describe a group of links with common structure and semantics. It describes a set of potential links between the classes.

Associations are often modeled bi-directional but they do not necessary have to be that. The direction that has a name is usually called the forward direction and the other the inverse direction. Hence a Person “works for” a Company, or a Company “employs” a Person. In practice an association can be implemented by a pointer.

The UML notation for an association is a line between classes normally accompanied by a name to indicate the directions.

An instance of an Association is a Link, which is a tuple of Instances drawn from the corresponding Classes. A link shows the relationship between class instances.

Besides having a name an association has a set of properties also located at the association-end (e.g. which Class the instance must conform to, their multiplicity, and if they may be reached from another Class instance via this connection). These are discussed in the following part.

An association-end has the following Attributes:

The role name of the association end. It provides a name for traversing from a source instance across the association to the target instance or set of target instances. It represents a pseudo-attribute of the source Class (i.e., it may be used in the same way as an Attribute) and must be unique with respect to attributes and other pseudo-attributes of the source Class

Specifies the number of target instances that may be associated with a single source instance across the given Association.

Figure 1 : A Company employs 0 or more Persons, and a Person works for one Company

Specifies the visibility of the association end from the viewpoint of the Class on the other end. 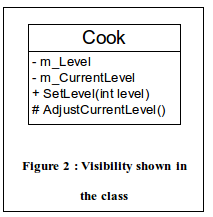 Figure 2 : Visibility shown in the class

Specifies whether an instance of the Association may be modified from the source end.

Specifies whether the set of links from the source instance to the target instance is ordered. The ordering must be determined and maintained by Operations that add links. It represents additional information not inherent in the objects or links themselves.

Specifies whether traversal from a source instance to its associated target instance is possible or not ‘true’ or ‘false’. Specification of each direction across the Association is independent. Traversal means that the source class can navigate the association and the target role name can be used in the navigation expression.

Specifies whether the target value is an instance or a class.

Aggregation is a mechanism for forming an object whole using other object as its parts. Only one end can be an aggregation. A part may belong to many aggregates. Parts may be created and inserted after the aggregate itself and may be removed explicitly from the aggregate. An aggregate may have recursive parts.

If an aggregate is removed, its parts will still exist.

Aggregation can be shown when the lifetimes are bound, or there is an obvious whole-part functional relationship, or when operations or properties propagate to the parts, such as destruction, location, movement or recording.

The following figure shows that any instance of Point may be in either a Circle or in a Polygon, and not in both at the same time. Circles and Polygons on the other hand may share the Style. When the polygon is deleted or destroyed the associated points belonging to the Polygon should be deleted. 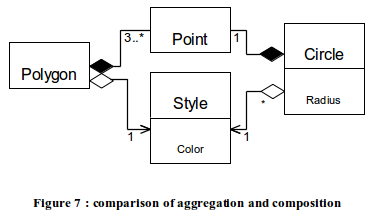 OCL is described as a navigation language for UML diagrams.

A path specifies an object or a set of objects being instances of the class.

It is possible to navigate from one class to another class using associations and association classes.

Starting from a specific object, we can navigate an association on the class diagram to refer to other objects and their properties. To do so, we navigate the association by using the opposite association-end:

self.manager — is of type Person

Using an arrow ‘->‘ followed by the name of the property accesses a property of the collection itself. The following example is in the context of a person:

This applies the size property on the Set self.employer, which results in the number of employers of the Person self.

This applies the isEmpty property on the Set self.employer. This evaluates to true if the set of employers is empty, and false otherwise

At most one AssociationEnd may be an aggregation or composition.

Navigation over Associations with Multiplicity

Because the multiplicity of the role manager is one, self.manager is an object of type Person. Such a single object can be used as a Set as well. It then behaves as if it is a Set containing the single object. The usage as a set is done through the arrow, followed by a property of Set. This is shown in the following example:

‘self.manager’ is used as Set, because the arrow is used to access the ‘size’ property on Set. This expression result in 1

‘self.manager’ is used as Set, because the arrow is used to access the ‘foo’ property on Set. This expression is incorrect, since ‘foo’is not a defined property of Set..

‘self.manager’ is used as Person, because the dot is used to access the ‘age’ property of Person.

In the case of an optional (0..1 multiplicity) association, this is especially useful to check whether there is an object or not when navigating the association. 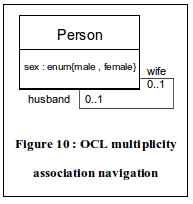 2. At most one AssociationEnd may be an aggregation or composition.

may be an aggregation or composition.

4. The connected Classifiers of the AssociationEnds should be included in the

Namespace of the Association.

Additional operations. The operation allConnections results in the set of all AssociationEnds of the Association.

5. Discriminator names must be distinct from attribute names and opposite AssociationEnd names.

The most recent updates on the Unified Modeling Language are available via the worldwide web: http://www.rational.com/uml.

A free OCL Parser and the most recent information on the Object Constraint Language are available via the worldwide web: http://www.software.ibm.com/ad/ocl.